Ironman Arizona 2018: So Cool to Be Back Toeing The Line!

I don’t think I had ever been this relaxed at an Ironman start before, despite the Seinfeld episode I was heading for with the frigid lake swim. At 61 degrees and even colder air temp, it was gonna be a shock to the system with the “jump in and start swimming” format of this race. No warmup for us lowly age groupers. I seeded myself at the back of the 1:00 swim group in the corral, prayed, peed myself to get warm, and then poured some bottled water down the neck of Dave Mirra’s wetsuit I was wearing to start the warming process. A goodbye kiss to Angie and I was down the ramp and in the water, thinking how cool it was to be free to do nothing but be the greatest me I could today. 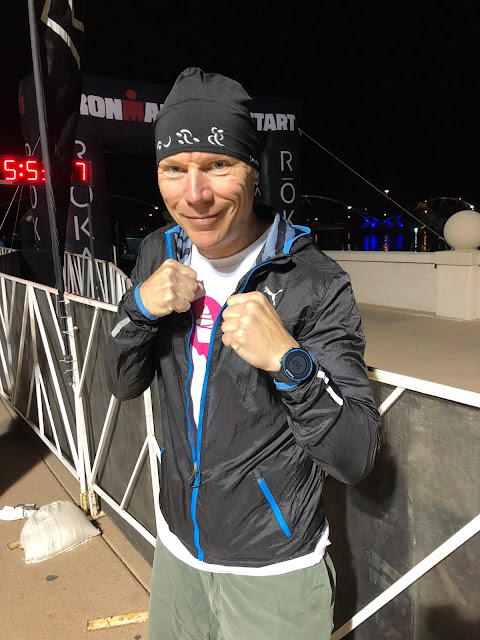 Rounding the first buoy I felt a sense of panic. The shockingly cold water and the roughness from all the swimmers just took my breath away and I needed to stop and tread. After 10 seconds or so I prayed and collected myself and pressed on but that was a scary moment for me. Even scarier than the time Angie had just cleaned the kitchen and I opened a fresh tub of electrolyte mix and spilled it all over the counter.

My swim sessions had been horrible and I just couldn’t touch the pace I was capable of in 2012/13, and I had resolved that a 1:08 swim was probably the best I could shoot for despite Brian Stover’s awesome workouts he fed me during my taper. They were the kind of workouts that looked fun on paper til you did them. I liked his workouts and believed they were helping despite my time trials not getting faster.

Swimming up the north shore I felt great. I was passing swimmer after swimmer and felt like a slippery, wet, neoprene Pac-Man chomping buoys. When I rounded the far buoys suddenly there were no swimmers around and only a few bobbing heads way in front of me. Where’d everybody go? I had one of those mysterious swimming moments where your throat suddenly produces a furball that blocks your windpipe so I stopped to hack it up. Then a few 100 more yards and I was on dry land and in 24th place in my age group. 1:05 out of the water. Huh, where’d that come from? 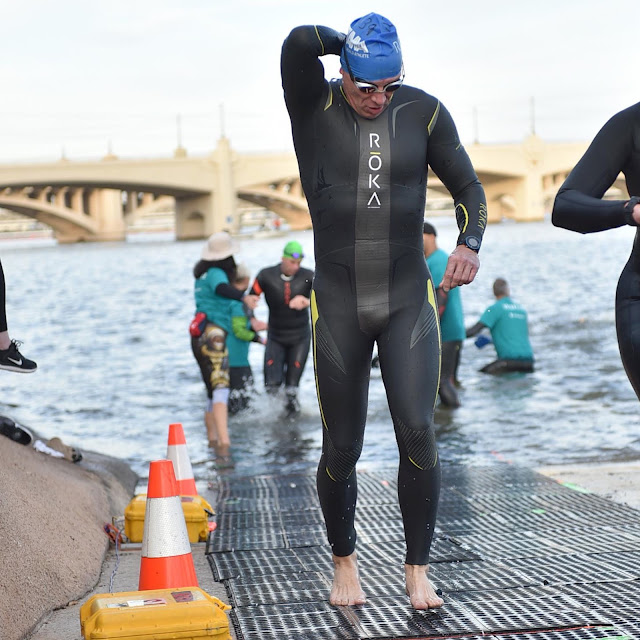 There’s a 1/4 mile run to T1 and my feet were numb and frozen. It felt like I was running on wooden stumps and I pounded my feet on the pavement as if to knock some sense of feeling in them.

I got to Dave’s bike and had to pee again so I stopped and took care of it first. I didn’t want to pee on his bike if I could help it. A volunteer asked if I was okay, cuz when you just stand there not moving with your eyes rolled back trying to pee you can imagine you look like medical attention might be a decent suggestion.

It was so inspiring to be on Dave's bike. His bike and me both back in an Ironman. Wow. I had gotten teared up racking his bike the day before, but now it felt like the three of us were flying and there wasn't any feeling in me but pure joy! 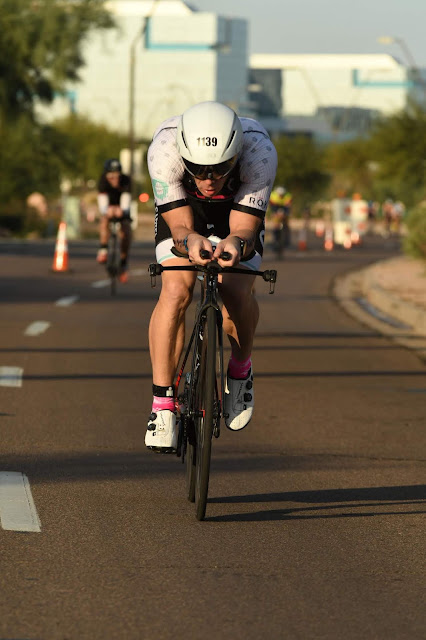 The bike out of town is a little rough with bumps and cracks and manholes in the road. I resolved not to take in nutrition til after I got on the Beeline highway where it was smoother. From that point, the road gradually climbs and the last 3 miles to the turn around are the worst. I was averaging 16 mph at 205-210 watts for this section heading outbound. Coming back I was flying at 32 mph and 130 watts. My goal was to average 180 watts, which I figured would be around 23 mph.

After lap 1 of 3, I saw Angie and she shouted that I was in 9th place in my age group. Coming in after lap 2 I was passed by two 30something year olds drafting off of each other. I followed them in, feeling sorry that they thought it was ok to cheat but also glad for the pace they were pushing me to keep. They also were paving the way through the slower riders that were on their first lap, which sometimes got a little dicey on the rough patches of road in town and so much bike traffic that comes from a short course. 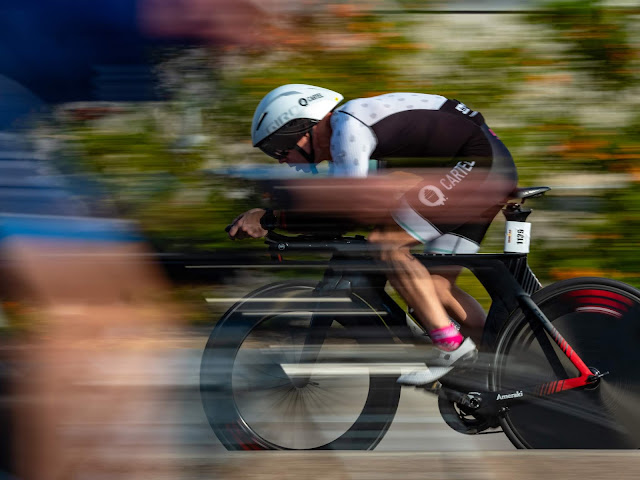 All of my nutrition on the bike leg I had on board or picked up at special needs. I didn’t use any of the aid stations. I asked Ironman to refund me the cost of those aid stations since I skipped them but they charged me for asking the question. But I was a little bummed you had to stop for special needs. I much prefer when you can fly through without stopping, if not to save time then at least for the challenge of grabbing my gear without getting the drawstring of the bag caught in my spokes, but they weren’t set up that way. 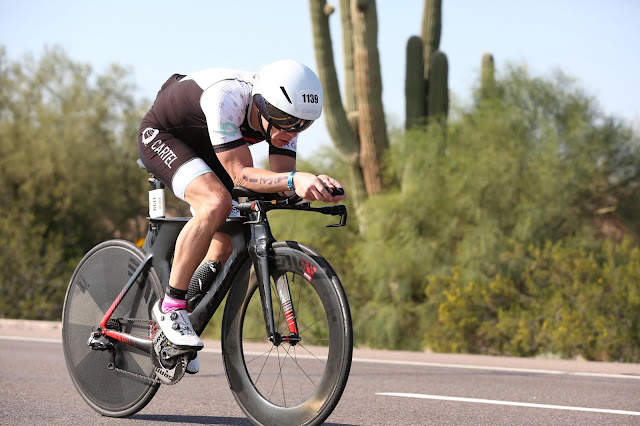 On my last lap I figured the ride was really over at the far turn around at mile 94, since the downhill return was so fast and easy I would just cruise in for the last 18 miles and let my legs recover. I finished the bike in 4:50 at 22.9 mph and right on my 180 watt average goal, a little tired in the legs, and in 5th place in my age group.

Leaving T2 I had to pee again so I stopped on my way out and let it flow. The first lap of the run was lonely. I found my legs quickly and was around a 7:45 pace for the first couple miles, which was feeling easy but I sensed it wasn’t gonna last. I peed myself again at mile 2 and was impressed that I had left quite a puddle when I came back the other way. I thought of my dog, Kona, and how proud he would have been of the territory I had marked. 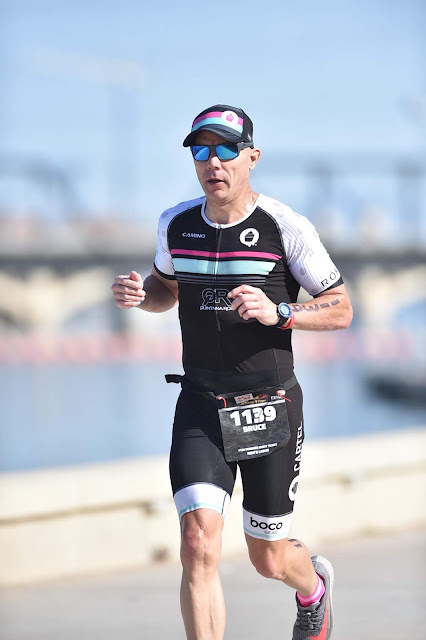 My goal was to run the first half of the marathon under 8:00/mi and then make decisions later as to whether it was sustainable or not. My Ironman theory is that I know I can pace for Kona contention through the swim, bike, and at least half of the run but what happens after that is where you just don’t know til you get there. And I would rather be on pace to that point and have to figure out a way to maintain it then to be behind schedule and trying to make up time lost. It’s a gamble but I like it.

It didn’t quite work this time and I resolved to walk aid stations around mile 11. At mile 13 I saw Angie and my parents and told her it wasn’t fun anymore, which is a dumb thing to say to someone who stopped having fun almost 8 hours ago when you started this thing.

I knew of at least 2 guys in my age group that had passed me, putting me in 7th place at best and out of Kona contention, so I just maintained my jog to the aid stations where I would walk and take on water, Red Bull, Coke, and Gatorade. I alternated salt and caffeine tablets at a station, then just fluids at the next, and a Maerten gel at the next, and then repeated the process.

Who’d my red “favorite volunteer” wrist band go to? Some buxom lady in an aid station wearing a Wonder Woman costume. It was either her or the one dressed like a taco.

I was a little pissed off at how many racers didn’t have their age on their calf, and for top age groupers I don’t think that’s inexperience or naiveté. That’s not wanting to share that info with your competitors. I asked one guy what age group he was in when he passed me since his calf was clean and he said “same as yours.” Whatever. I was out of contention anyway I told myself. 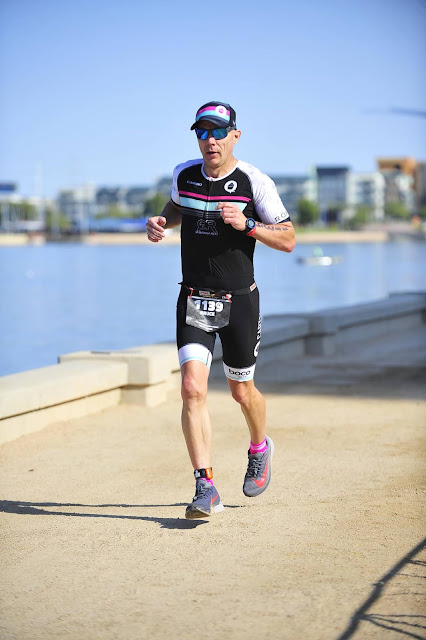 I still had a decent run despite all the aid station walks and crossed the finish line in 9:47, ninth in the 45-49 age group. I didn’t care I wouldn’t get to Kona this time. It was really just about proving to myself that I could still get back into Ironman shape after all the knee surgeries, the lack of fitness, the failure to toe the line at IM Maryland, loss of mojo, bike crashes, and other excuses I’ve been allowing myself since Kona 2013. 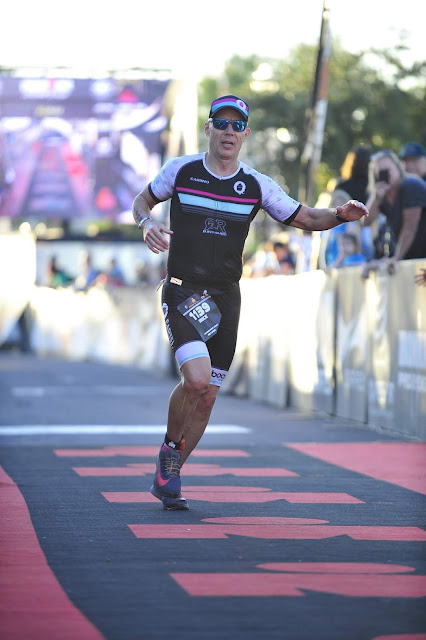 I thank God that He has given me so much through all this. I’m not saying never, but for now I’m good with how my 6 Ironmans have gone and I’m happy to close that book at least for a while. Well, maybe. I could probably get talked into one. I dunno. 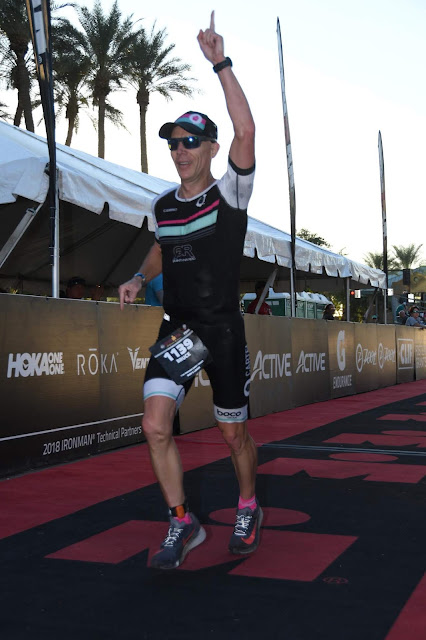 Thanks to everyone that offered encouragement leading up to this, and for all the prayers and good vibes during the race. Best reason to pick Arizona as your Ironman race? No guilt feasting on Thanksgiving!

Other Crap I've Written About

"The only good pace is a suicide pace, and today looks like a good day to die." - Prefontaine

"There are no drafters in heaven." - Carl Bonner

"Success on race day starts with success in the bathroom." - CC Wilkins

How bout my discount code for FS Series races?

Wanna Kick My Butt? Here's Your Next Chance: 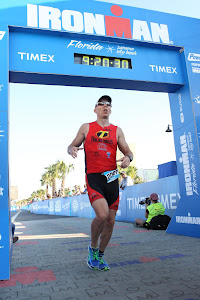 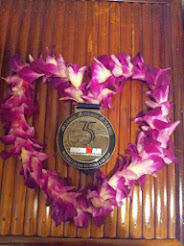 Bringin' the pain on the P3.